Seat-Compare.com have discovered the best and most accurate maps online. The home team of Stamford Bridge in London is Chelsea F.C., order tickets at the best prices online. For fan reviews of Stamford Bridge then see below. If if you are looking for more events in London here then visit here for a complete list. 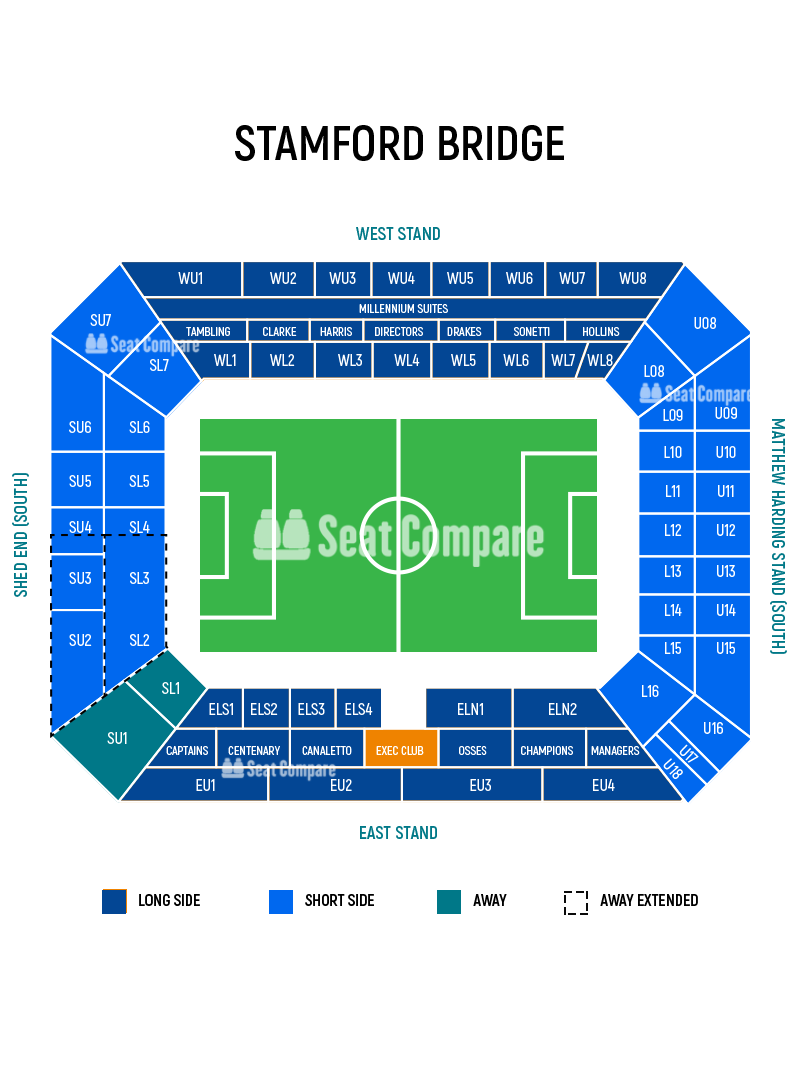 Stamford Bridge is one of the biggest stadiums in London and in fact also the ninth largest in the Premier League. It is located in Fulham area in South West London with the capacity of 40,834 people. Although it is barely used for any international fixtures even for friendly matches, Stamford Bridge is one of the elite stadiums as well as the oldest in London as it was built in 1876, which was a few decades before being owned by Chelsea in 1905.

The stadium which is also known as ‘The Bridge’ has gone through two renovations, back in 1905 and 1990s to entirely remove the running tracks it used to have and transform it to all-seater stadiums. There are four stands inside the venue, Matthew Harding Stand on the North, The Shed End on the south where the away fans are mostly placed, the East Stand with family section in it and the West Stand with Executive boxes in it. Furthermore, the supporting facilities in the stadium are the Centenary Museum which was opened in 2005 and is situated in the former Shed Galleria and Chelsea Megastore on the south-west corner of the stadium. Previously, during Roman Abramovich’s predecessor’s reign, there were hotels, restaurants, bars and apartments developed by Ken Bates, the previous owner. Unfortunately, they were scrapped off since they were less profitable.

Stamford Bridge has staged some memorable matches. The earliest ones were the FA Cup finals from 1920 to 1922 before moving to Wembley in 1923. It has been used for ten FA Cup semi-finals and ten Charity Shield matches too. Some of the international friendly matches held in this venue are England against Scotland in 1913, England versus Austria in 1932 and the very last one, Brasil against Russia in 2013. The highest attendance in The Bridge was not in the modern era but in 1935 when Chelsea was up against Arsenal. There were 82,905 people watching the game live. Meanwhile, the most unforgettable one was probably the Champions League semi final in 2008 when they thumped Liverpool 3-2 after extra time. Such result led them to their first Champions League final. Apart from football, it has been used for a number of games in rugby, baseball, American football, speedway, cricket and even greyhound racing

Due to its location in London, it is very easy to get to Stamford Bridge, especially by public transport. If one takes London Buses, one should take route 11, 14, 211, 414 and N11 to get off in Walham Green, which is only two minutes to the venue. Another option is getting off in Fulham Town Hall if one takes the bus route 28,295,391, 424 and N28.

Another easy access is by taking London Underground or the Tube. One can pick District Line to get off in Fulham Broadway, which is only five-minute walk to the stadium. Meanwhile, if one opts for National Rail or Southern Ralway, take West London Line and get off in West Brompton Station (followed by interchange with District Line Tube) and Imperial Wharf respectively.

Last but not least, one can also take London River Service boat and get off on Chelsea Harbour Pier, which is only fifteen minute-walk to the venue.

Seat-Compare.com is the first website to offer live pricing comparison of different websites. Other websites give you the lowest price of a single Stamford Bridge ticket but this doesn't reflect the true market.

All Stamford Bridge Tickets in London purchased through seat-compare.com are 100% guaranteed through the safe suppliers. All tickets will be authentic, valid and delivered to you on time. If the event is cancelled then you will also receive a complete refund. Tickets for rescheduled Stamford Bridge events will be also included.