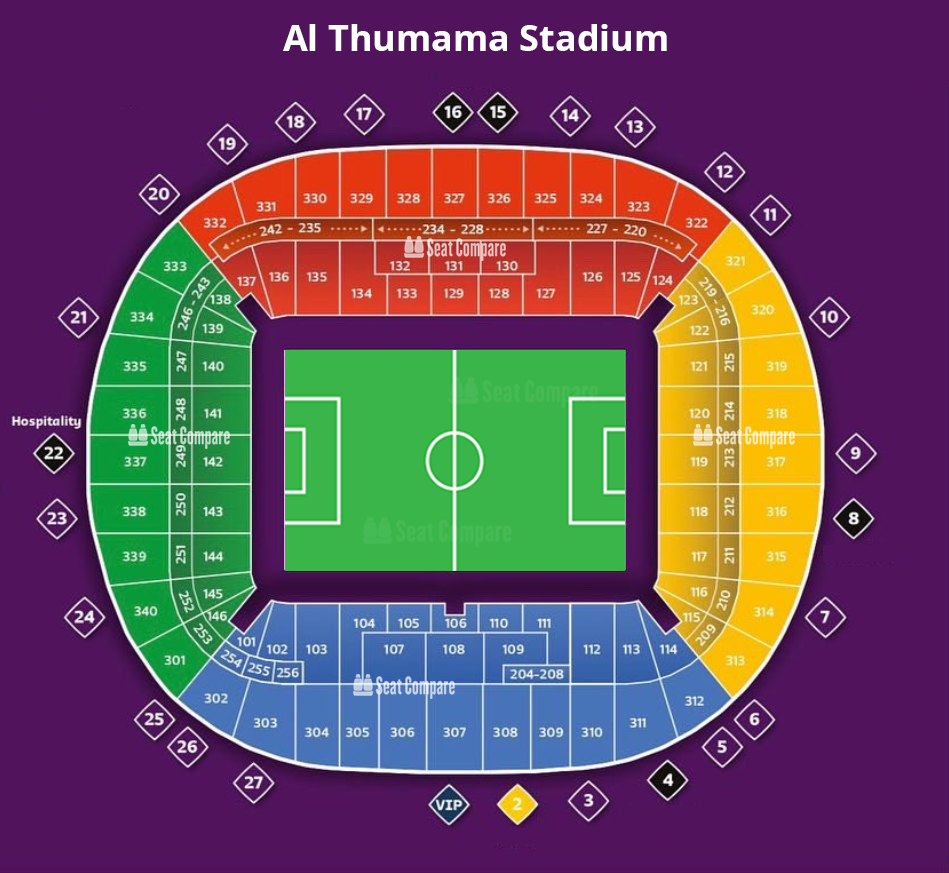 Al Thumama Stadium is one of the last two venues which are still in progress of construction and will be expected to open later this year. It is located just five kilometers away from Hamad International Airport, Doha and the first World Cup Stadium designed by a Qatari architect, Ibrahim Mohammed Jaidah. The name is taken from the area of the site plus the tree only grows there, whereas the design is inspired by the traditional cap normally worn by the boys in Middle East before they are coming to adulthood, gahfiya.  Find your FIFA World Cup tickets here.

Al Thumama’s construction began back in 2017 with Al Jaber Engineering and Tekfen Construction, the joint venture of  Qatar and Turkey in charge of the construction, will have finished before December 2021, since it has been scheduled to host several games in FIFA Arab Cup 2021. It has the capacity of 40,000 fans until the end of the World Cup and then it will be reduced to only half of it. The other half, especially on the upper tribune of the stadium, will be transformed into lines of boutique hotels with patios. Moreover, this site is likely set to become the attractive multi-purpose complex for both sports and leisure events. There will be eight football pitches nearby the stadium plus other sport facilities, as well as the huge park surrounding the venue. Al Thumama also received an award at MIPIM/Architectural Review Future Project Award 2018 in the sport and stadiums for the best design award in the “Sports Stadium Facilities and Stadiums Under Construction” category.

Since the venue is still under construction, the games in FIFA Arab Cup 2021 next December will be its notable ones. Al Thumama is bound to stage four matches at the group stage, including the clash of Morocco against Saudi Arabia plus one fixture each at the last eight and at the semifinal. Meanwhile, in the world cup finals, it will be contesting eight matches, including two games at the knock out stage, one in the round of 16 and at the quarter final each.

To reach Al Thumama from Doha, one can take a bus line 12 from Doha Bus Station to Al Mansoura Medical Commission. It only costs $1-$2 and takes about one and a half hour as a 43-minute walk is still necessary from the bus arrival spot to the stadium. Another way to get there is by taking a taxi, which only takes 11 minutes but costs $ 11.

Seat-Compare.com is the first website to offer live pricing comparison of different websites. Other websites give you the lowest price of a single Al Thumama Stadium ticket but this doesn't reflect the true market.

All Al Thumama Stadium Tickets in Doha purchased through seat-compare.com are 100% guaranteed through the safe suppliers. All tickets will be authentic, valid and delivered to you on time. If the event is cancelled then you will also receive a complete refund. Tickets for rescheduled Al Thumama Stadium events will be also included.