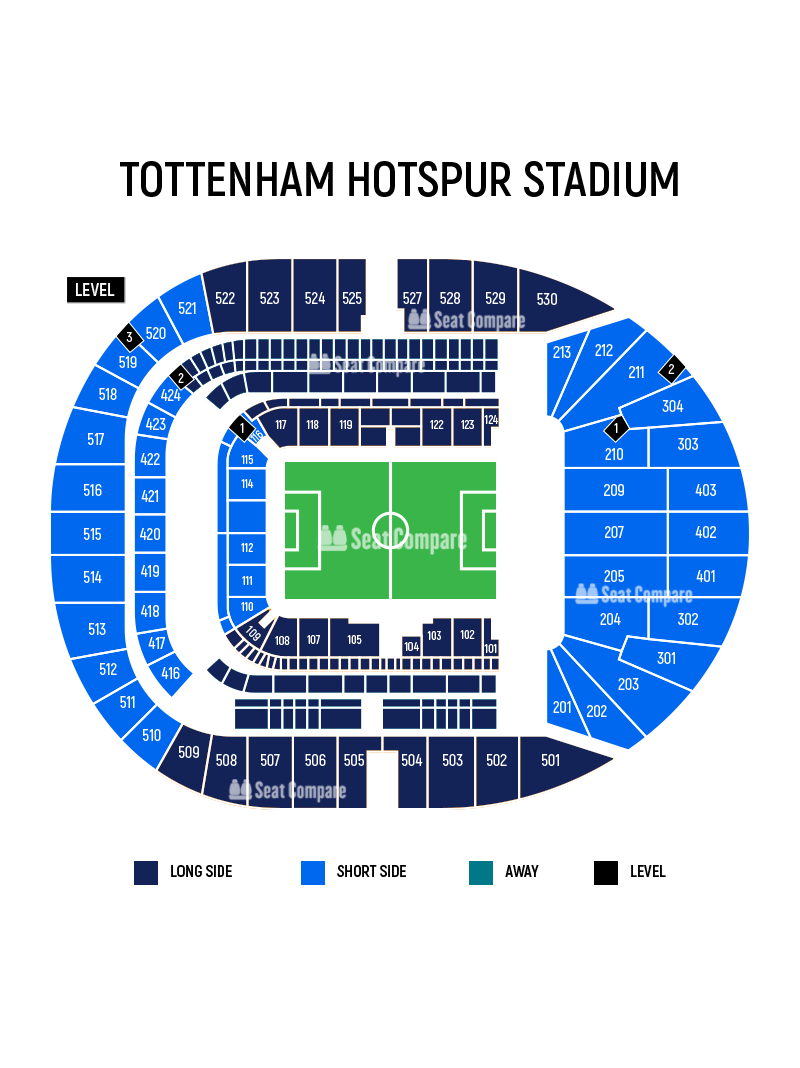 Tottenham Hostpur Stadium is the latest newly built venue in London today. It is also the largest one in the capital exceeding Wembley with the capacity of 62,850 people. This new home ground of Tottenham replaces their old home turf, White Hart Lane, which was demolished completely in 2017. However, Spurs were not able to use the venue till it was fully ready in April 2019. Since then, it has become one of the most modern multi purpose stadiums in the UK.

Tottenham Stadium is one of a kind compared to any other venue as it is designed in a unique shape, just like the concert hall emphasizing the good acoustic to capture the fans’ voice to become louder and longer inside the arena. There are still four stands in the stadium despite having a bowl shape. They are the South Stand for the home fans, the North Stand for the away fans, the East and West Stand where premium seats, private loge plus seats for premium members and corporate guests are well placed. In addition, there is a retractable pitch depending the purpose of the events, restaurants, medical facilities, hydrotherapy pools, bars (The Shelf in the East Stand, The Dispensary in the West Stand, Goal Line Bar in the South Stand), in-house bakery, food and beverage stands centre in Market Place, Sky Lounges, entertainment and banquet facilities, community health centre, the public media room M Café, the club shop Tottenham Experience and the museum.

The highest record attendance at this stadium was in 2019 when Spurs was taking on Chelsea in the Premier League. The game attracted 61,104 fans watching the London clash live. Yet, the most unforgettable game was not in the domestic match but in the European competition. At the quarter final of Champions League 2019, Spurs defeated Manchester City 1-0 at the first leg. It was a victory which helped them to go through their first semi final of the European top flight. Meanwhile, for the non-football events, this stadium host various sporting events, from the first ever NFL games outside North America in 2019, the flag football, rugby to boxing. In addition, Tottenham stadium has held several concerts and was even used as the first community hub for providing food for those who needed the most during the pandemic as well as the first drive though covid-19 testing centre plus Woman Outpatient Services of the North Middlesex University Hospital.

There are a number of public transports the fans can take to get to the venue. If one choose a bus, the one with the routes 149, 259, 297, 349 and W3 stop nearby the stadium. There is also shuttle bus service run by Tottenham from Alexandra Palace to Haringey Sixth Form College, Tottenham Hale to Duke’s Aldridge Academy. Furthermore, there is Big Green Coach rent by the Lillywhites to pick up and drop off the supporters on certain spots.

Meanwhile, one can also take the train with a number of options available from London Underground, London Overground and National Rail. The first one stops at Seven Sisters Tottenham Lane, the second one stops at White Hart Lane while the last one stops at Northumberland Park.

Seat-Compare.com is the first website to offer live pricing comparison of different websites. Other websites give you the lowest price of a single Tottenham Hotspur Stadium ticket but this doesn't reflect the true market.

All Tottenham Hotspur Stadium Tickets in London purchased through seat-compare.com are 100% guaranteed through the safe suppliers. All tickets will be authentic, valid and delivered to you on time. If the event is cancelled then you will also receive a complete refund. Tickets for rescheduled Tottenham Hotspur Stadium events will be also included.