Seat-Compare.com have discovered the best and most accurate maps online. The home team of London Stadium in London is West Ham United, order tickets at the best prices online. For fan reviews of London Stadium then see below. If if you are looking for more events in London here then visit here for a complete list. 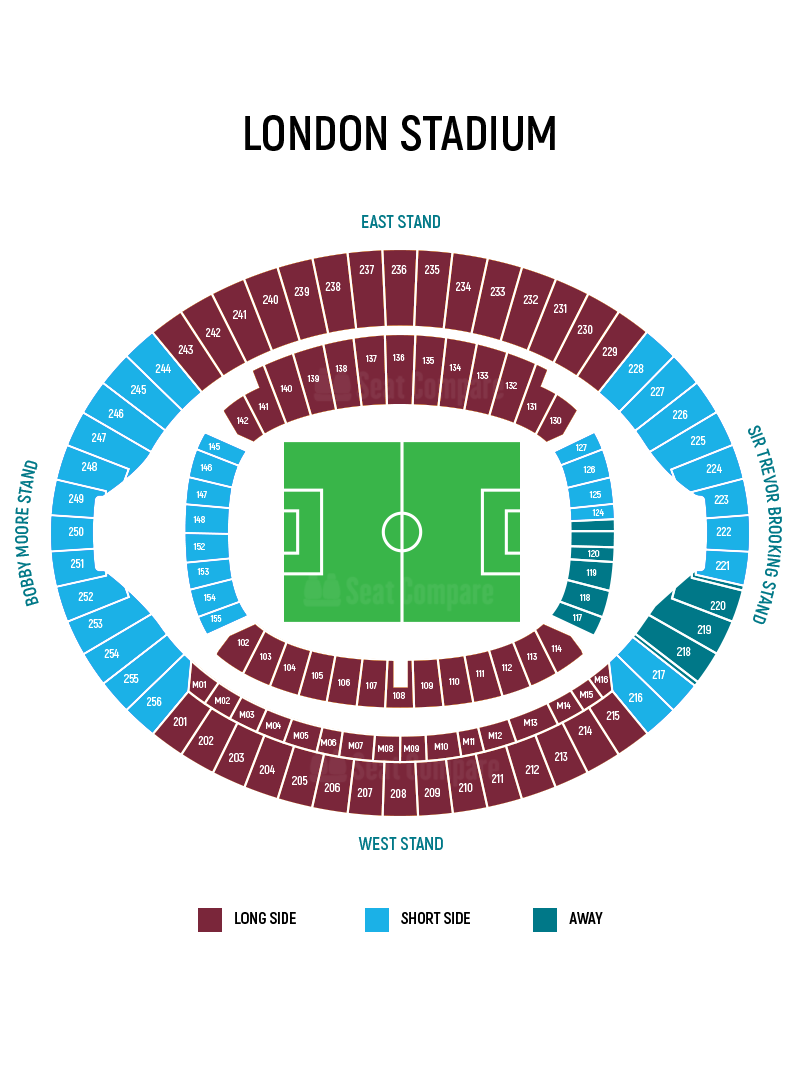 London Stadium is one of the originally multi purpose venues in UK instead of for football only. It was built from 2008 to 2011 for London 2012 Olympics and located in a huge and advanced multi sports complex in Queen Elizabeth Olympic Park, Stratford, London, along with other sport venues such as London Aquatic Center, Lee Valley Hockey and Tennis Center, basketball and water polo arena. After the summer olympic, the venue has been the home turf for West Ham United since 2016.

Considering the joint location with other venues in the Olympic Park, London Stadium’s facilities are not considerably many apart from car park, health care center, running track, cycle racks for bicycle, cash machine and multi faith rooms. The other supporting facilities such as the park, media room, and observation tower belongs to Olympic Park.

The highest attendance record in London Stadium was the first home game of The Hammers in the Premier League 2016/2017 season with 56,977 people when they played host to Bournemouth. Declan Rice and Co managed to come from behind after conceding 2-0 and won 4-2. That is the only worth remembering game in football so far. However, in non-football events, there have been plenty of them. The most unforgettable one was of course the London 2012 Olympic Games, from opening and closing ceremony to the athletic finals, plus the Paralympic Games afterwards. Furthermore, some other sporting events which have been held in this stadium are 2015 Rugby World Cup, 2017 World Athletic and Para athletic championships, 2018 Athletic World Cup, 2019 Cricket World Cup, 2018 Major Baseball League London Series plus some other less well-known sport events such as motosport race and rugby league and several concerts.

London Stadium is easily accessible by public transport. If the fans opt for taking bus,  there are four routes they can take. The 108 route can be taken at Lewinsham Station and ends at Stratford Internationals Station, the 308 route can be taken from Wansted and stops at Clapham Station, the 339 route begins at Shadwell Station and ends at Leytonstone Station, and the 388 route starts at Elephant & Castle to Stratford City Bus Station.

Seat-Compare.com is the first website to offer live pricing comparison of different websites. Other websites give you the lowest price of a single London Stadium ticket but this doesn't reflect the true market.

All London Stadium Tickets in London purchased through seat-compare.com are 100% guaranteed through the safe suppliers. All tickets will be authentic, valid and delivered to you on time. If the event is cancelled then you will also receive a complete refund. Tickets for rescheduled London Stadium events will be also included.