Seat-Compare.com have discovered the best and most accurate maps online. The home team of Anfield in Liverpool is Liverpool FC, order tickets at the best prices online. For fan reviews of Anfield then see below. If if you are looking for more events in Liverpool here then visit here for a complete list. 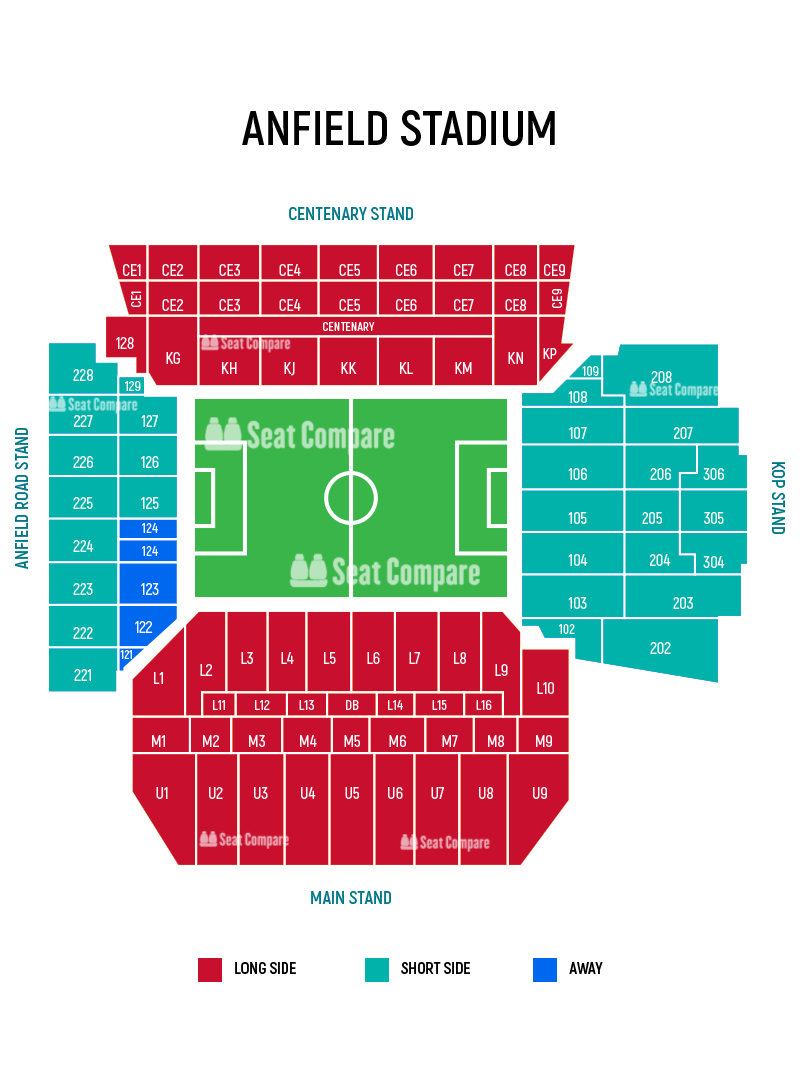 Anfield stadium is iconic in the world of football. Order tickets to Anfield road here at Seat-Compare.com. Anfield is one of the most iconic stadiums in England and the world. It is not only famous for its club, Liverpool FC, but also due to its history. Built in 1884, this stadium originally belonged to Everton. However, a dispute rose between The Toffees committee and one of its member over the club management and negotiation on buying the land in 1892. Such feud led to Everton’s move to Goodison Park which is not so far away from Anfield, while Liverpool FC was just founded afterwards.

Anfield’s four stands are the Main Stand where director’s box and VIP lie as well as the technical area below, the Kop where the die-hard fans are usually placed, Sir Kenny Danglish Stand and the Anfield Road Stand for the away fans. There are also Reducate, The Reds Museum and official club shop, 59 spaces for the fans with disabilities spread all over the stands, 38 of which are for the visually impaired fans in the old paddock area of the Main Stand with the space for personal assistant and headset for live commentary are provided. The stadium entry has been developed too by using RFID (Radio-Frequency Identification) smart card which was introduced in 2005.

Anfield is definitely identical to The Reds’ games with the record attendance took place in 1952 while Liverpool was meeting Wolverhampton in FA Cup fifth round with 61,905 fans watching the game. This venue also hosted five FA Cup semi finals and several international friendly matches. The first one was England against Ireland in 1889 while the last one was England versus Uruguay in 2006. Moreover, Anfield was also chosen to stage international fixtures which did not involve England such as the Euro 1996 play off between Holland and Ireland and four games in EURO 1996, Italy-Russia, Italy-Czech Rep, Russia-Czech Rep at the group stage and one match at the quarter final while Netherlands facing off France. For non-football use, the stadium once contested a boxing matches in 1930s, the finish line of marathon in 1920s as well as some music concerts.

To get to Anfield, it is always best to take a train on West Coast Main Line from London Euston and get off at Lime Street Station which is still 3 km away or Kirkdale Station which is even closer.

Furthermore, for those who come from outside the city by train on Merseyrail Northern Line, they can change the direct bus service to Peoplebus Soccerbus at Sandhills Station which would drive you to the venue. Be at the next Liverpool FC match and order tickets including for all games in the English Premier League.

The Best Deals on Anfield Tickets

Seat-Compare.com is the first website to offer live pricing comparison of different websites. Other websites give you the lowest price of a single Anfield ticket but this doesn't reflect the true market.

All Anfield Tickets in Liverpool purchased through seat-compare.com are 100% guaranteed through the safe suppliers. All tickets will be authentic, valid and delivered to you on time. If the event is cancelled then you will also receive a complete refund. Tickets for rescheduled Anfield events will be also included.