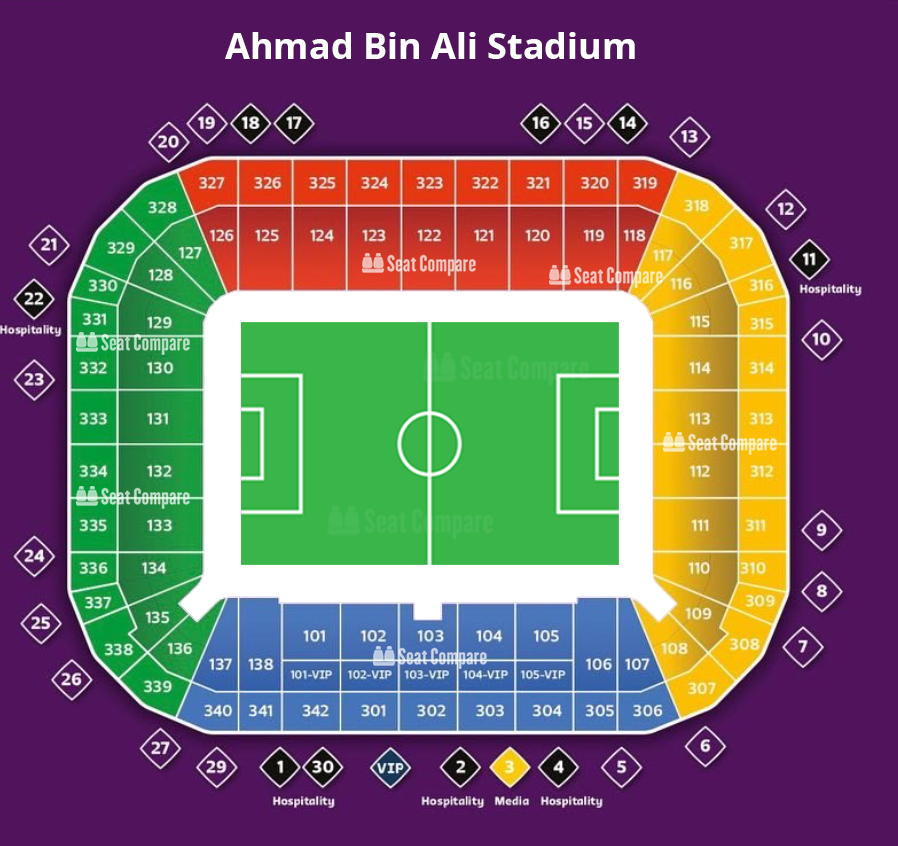 Al Rayyan Stadium is actually the non official but popular name for Ahmed bin Ali Stadium. It is located at the very same site of the old stadium in Umm Al-Afaei, the city of Al Rayyan, the western suburban area of Doha. This is one of the green energy-based renovated venues which could hold 40,740 spectators and is prepared to stage some of the matches in FIFA World Cup 2022. However, its capacity will be reduced to 21,000 after the tournament. Find your FIFA Football 2022 World Cup Tickets here.

The new stadium was first built within the years of 2016 and 2018 before being reopened in 2020. Designed by Pattern Design with the joint venture of Qatar and Poland construction manufacturer, Al-Balagh and Larsen & Toubro as the responsible party for the renovation, Ahmed bin Ali Stadium was erected by using approximately 80 percent of the demolished materials from the old stadium. Its designed is inspired by the desert dune. Its most prominent feature is probably the prominent façade on the outer part of the venue, which is covered by steel ring. It displays visual dynamism on the outside. Such is also connected to solar panels, photovoltaic, at the roof to provide the support on building maintenance. Moreover, Al-Rayyan is also well equipped with DC cooling technology via a central station to help providing the control of the temperature on the pitch and stands plus supplying chill water, apart from the standard facilities as a sport centre, food court, open spaces and wide parking area. There will be horse riding track, cricket field and surely more football pitch available for the public.

Since its reopening in January 2020, Ahmed bin Ali Stadium has been and will be used for a number of important fixtures in several upcoming events prior to World Cup final round. Last year in February, it hosted four games of FIFA Club World Cup 2020, including the semifinal between UCL champions Bayern Munich vs the African champions Al-Ahly. Next, later this year on December, this venue is included for staging four games in FIFA Arab Cup 2021, the trial tournament for the main show, World Cup 2022, in which Al-Rayyan is also picked to hold seven matches, including one clash in the round of 16.

To get to the home ground of Al Rayyan SC and Al Kharitiyath SC, one can take Metro M2 or bus 104 and 104A plus 104B in the bus service. The first two bus line go to Dukhan area while the last one heads to Al-Shahaniya. Mall of Qatar bus station, which is about 12 minutes from the stadium, is the nearest one to get off.

Seat-Compare.com is the first website to offer live pricing comparison of different websites. Other websites give you the lowest price of a single Al Rayyan Stadium ticket but this doesn't reflect the true market.

All Al Rayyan Stadium Tickets in Al Rayyan purchased through seat-compare.com are 100% guaranteed through the safe suppliers. All tickets will be authentic, valid and delivered to you on time. If the event is cancelled then you will also receive a complete refund. Tickets for rescheduled Al Rayyan Stadium events will be also included.