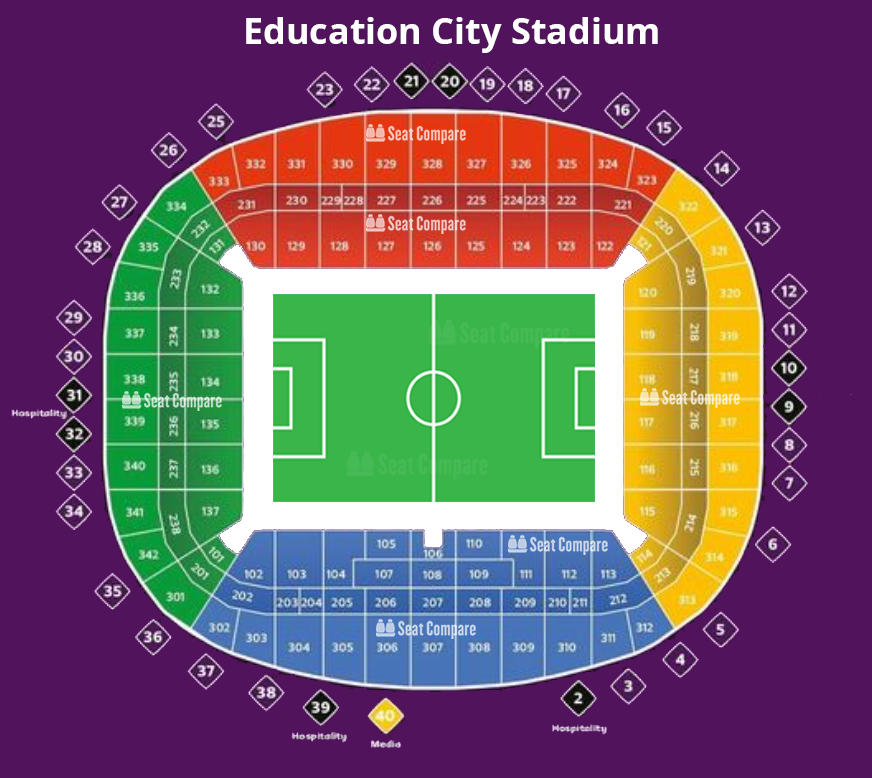 Education City Stadium is one of a kind venue for the World Cup 2022 due to its location, which is literally situated inside the campus area in Al-Rayyan. No wonder that such name is taken since it is also surrounded by several universities and will be used entirely for the university athletic team after the tournament finish with the reduced capacity to only 25,000 seats. At the moment, this stadium could hold over 45,000 people and has been used for a number of sporting events and international matches. Find your football 2022 World Cup tickets here.

Education City was built in 2016 and designed by Fenwick Iribarren Architects alongside Pattern Design while the constructing work was done by Joannou & Paraskevaides Conspel. It was planned to be open in 2019 but postponed till early 2020. This stadium has been rated five star by GSAS (Global Sustainability Assessment System in May 2019 for its eco-friendly building materials as well as a number of outstanding facilities in the area such as the illuminating façade on the daylight and at night with LED diodes connected to solar panels to save 20 % of the energy consumption, 39 sky boxes for maximum 36 people, 6 media pavilions and conference room up to 150 people, low-flow plumbing which can reduce 55 % of the water usage, medical centre, a golf course, swimming pool, green space and pedestrian, biking tracks, a surfing hall plus easy access for fans with disabilities. The sustainable energy on electricity which is supplied to the surrounding public facilities in the area like universities, medical centre, and sport-related ones is also another reason for the stadium’s high ratings.

This venue which is also nicknamed ‘Desert Diamond’ due to its main shape, had been chosen to hold four notable matches in FIFA Club World Cup 2020. The first one was the second round game between Al-Ahly against Al-Duhail. Then the three important fixtures, one semi final between Palmeiras and UNAL, the third place play off and the clash in the final when Bayern encountered UNAL. In the next FIFA Arab Cup 2021, Education City will be staging only five matches, four games at the group stage and one at the quarter final, whereas in the world cup finals 2022, it will be hosting seven fixtures consisting of five matches at preliminary round and two fixtures at the knock out stage.

To get to Education City is fairly easy beside taking a taxi which can cost $ 27 minimum although it only takes 23 minutes. If one chooses to go by Doha Metro line, one can only pick the green line metro from Al Mansoura station in Doha to the area which is owned by Qatar Foundation, and take trams directly to the stadium.

Seat-Compare.com is the first website to offer live pricing comparison of different websites. Other websites give you the lowest price of a single Education City Stadium ticket but this doesn't reflect the true market.